Stupid Patent of the Month: 100+ companies sued over “personalized content” by Joe Mullin
Wednesday March 2nd, 2016 at 10:50 AM 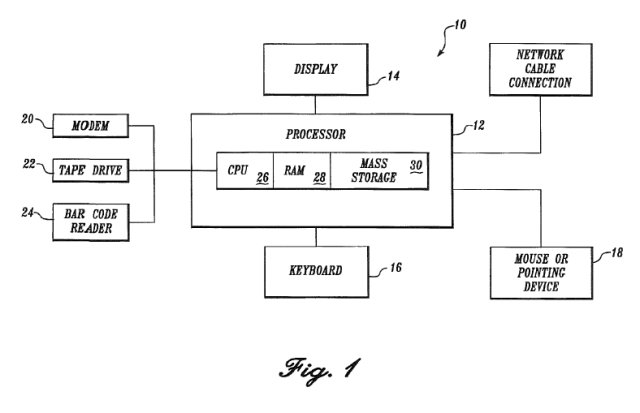 "Personalized content" is a phrase so vague that it could mean just about anything. That quality makes it just about perfect for use by a patent troll. This month, the Electronic Frontier Foundation's patent lawyers have honed in on a patentdescribing a way of "presenting personalized content relating to offered products and services," owned by Phoenix Licensing LLC, a patent-holding company controlled by Richard Libman, an Arizona man who's sued more that 100 companies.

The main claim of US Patent No. 8,738,435is little more than a description of sending a "communication" with "identifying content" to a "plurality of persons." The patent essentially describes any type of personalized marketing, as long as it involves a "computer-accessible storage medium."

In other words—personalized marketing, but on a computer.

But in lawsuits filed on behalf of Libman's companies, like one against SF-based Credo Mobile, his lawyers say the patents "go beyond simply describing a way to computerize a manual process." They also "describe a process of choosing product characteristics, or customizing products, for a specific individual... using decision criteria, then creating customized offer communications from same, all in a mass-produced way."

Earlier mass-mailing systems "produced output that was either non-customized or just customized to address a given person" and could not select products and "characteristics appropriate for a given person," Libman's lawyers write.

Wordy language notwithstanding, the patents look like the type of "do it on a computer" claims that should get tossed out as "almost surely invalid" under the Alice v. CLS Bank Supreme Court precedent, EFF lawyer Daniel Nazer explains in his blog post. "Unsurprisingly, given that its patents are so vulnerable to challenge under the Alice standard, it has filed all of these lawsuits in the Eastern District of Texas." That plaintiff-friendly court is less likely to invalidate patents under Alice.

But the newest Phoenix Licensing lawsuits are all based in East Texas, despite the fact that inventor Richard Libman is based in Arizona, and his targets are all over. In the lawsuit against Credo Mobile, the complaint shows how Libman and his lawyers believe that essentially any type of personalized marketing offer infringes their patents. 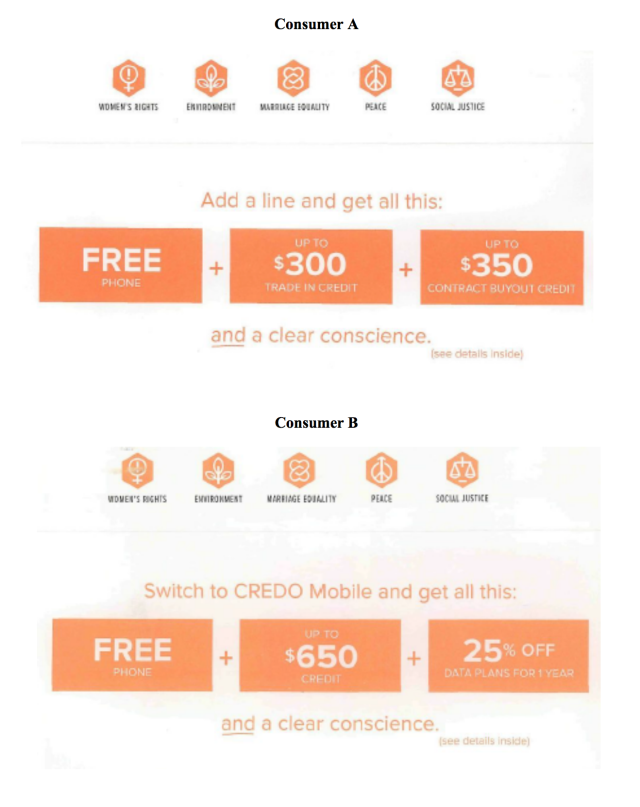 Libman's attorneys hail from Russ August and Kabat, a Los Angeles firm that also represented TQP Development, one of the most successful patent trolls, in its trial against Newegg. The same team of lawyers now representing Libman won a $2.3 million jury verdict for TQP, but the TQP patent was invalidated in post-trial action.

Libman continues to get "continuation" patents, essentially variations on his original 1996 application that change the wording around, but preserve his 1996 "priority date" for lawsuits. "But this is not evidence of inventiveness," argues Nazer. "Rather, it simply shows that the Patent Office is asleep at the wheel."

Like many lawsuits filed by patent-holding companies, the Phoenix Licensing complaint spends some time venerating the named inventor, who, once upon a time, had a business other than patent lawsuits. "[T]he public has benefitted from Mr. Libman's disclosures," Libman's lawyers state. Before Libman invented personalized marketing, they claim telemarketers and agents "worked within a limited universe of defined products and services, and worse, with limited information about them and their customers."

News articles from 1997 and a press release from 2001 are quoted in the complaint, discussing Libman's company ICA Insurance Marketing. As president of ICA, Libman worked with banks to send offers of insurance based on demographic information in their accounts.

Ars called Libman to ask about his inventions, but he refused to discuss them. "I can't do that," he answered. "I'm in litigation, as you know."

Asked why he sued more than 100 companies seeking licensing fees, Libman said, "I'm not going to even comment on that."

The only thing Libman would say about his career of patent lawsuits is that he had read the EFF blog post, and he didn't think much of it.

"It's written by somebody who didn't bother taking a look at the history of the patents," said Libman. "I'm not a troll. I'm the inventor on all my patents. This is just one of a myriad of articles, on a myriad of different inventors, calling them names and trying to support the anti-patent movement that seems prevalent these days."

Have you ever wondered about the evolutionary origins of beards?

zparsons
reply
Yes, thank you for maintaining this feed! :)

Woah, it looks like they removed images from their feed. I'll check what happens tomorrow and see what can be done from there.
San Diego, California

jepler
hmm ain't that a kick in the teeth.

crazysim
I'm not too terribly distraught. PITA but I guess I'll have to create a throwaway Heroku app and have that scrape and produce a fixed RSS feed. Did that for This American Life. Anyway, tomorrow.

kyounger
Your work is appreciated!

Cigarettes: A product that kills two out of three of its users by Ars Staff
Monday March 2nd, 2015 at 7:13 PM

“Smoking Kills” is more than just a catchy PSA or smoking cessation campaign slogan—it’s verifiable fact. Since the mid-1900s, study after study has generated compelling evidence linking smoking to increased mortality rates. Arguably, the most influential of these is the 1956 publication of smoking data on the “British Doctors Study,” which presented compelling evidence that over half of smokers would eventually die due to smoking-related complications. A new study published in BMC Medicine asserts that this mortality rate may even be as high as 66 percent, meaning that two out of three smokers will eventually die from conditions associated with their smoking.

This study, put together by investigators from the National Centre for Epidemiology and Population Health at the Australian National University, followed 204,953 men and women over 45 years old from New South Wales, Australia. These participants were categorized into groups of smokers, past smokers, and never smokers.

(These factors were accounted for when the mortality statistics were examined.)

Person-years are a measure of time used in epidemiological studies, in which the years studied for all participants in a study are added together. For example, if three people were studied for 10 years each, 30 total person years would be reported in the study. In the study published in BMC Medicine, a total of 874,120 person-years were examined, and during those person-years, 5,593 deaths occurred among the study population.

This study does report the promising finding that quitting smoking, even later in life, can considerably reduce the risk of mortality associated with smoking, a finding that’s been demonstrated several times in the literature on smoking. The researchers found that when they compared participants who had quit smoking at ages 45-54, the relative risk of dying for men and women was only 1.36 or 1.52 times the risk of dying in never smokers. They found that the risk of death declined progressively, and this was proportional to the amount of time that passed since the participant quit smoking.

Though the findings of this study are extremely similar to smoking studies conducted in the US and the UK, this is the first large-scale population study conducted in Australia, and demonstrating that the risks of smoking transcend cultural lifestyle factors. Additionally, despite the fact that this finding is similar to the existing literature on the risks of smoking, this striking data on the nearly three-fold increase in mortality for smokers remains relevant, as many people seem to either ignore or never fully register that message.

The good news is that it’s not too late to quit smoking to improve your future health.

Stephen Fry: Putin is making scapegoats of gay people, just as Hitler did Jews
Wednesday August 7th, 2013 at 11:16 AM

US drug agency gets intel from NSA, then lies about its origins to build cases by Cyrus Farivar
Monday August 5th, 2013 at 5:21 PM

On Monday, Reuters reported on previously undisclosed documents showing that a secret Drug Enforcement Administration (DEA) unit uses information collected by intelligence agencies—including the National Security Agency (NSA)—to build evidence for criminal cases. The true origin of this information is usually concealed from defense lawyers—and sometimes even prosecutors and judges—to seemingly do an end-run around the normal court procedures for a criminal defendant’s right to discovery.

According to the documents, which Reuters did not publish, the DEA’s “Special Operations Division” (SOD) trains its own agents to “recreate” detective work. This is dubbed “parallel construction.” The news organization said it interviewed many current and former DEA agents and officials who defended the practice, saying that it was “decades old” and was used “every day.”

A former federal agent in the northeastern United States who received such tips from SOD described the process. "You'd be told only, ‘Be at a certain truck stop at a certain time and look for a certain vehicle.' And so we'd alert the state police to find an excuse to stop that vehicle, and then have a drug dog search it," the agent said.

One current federal prosecutor learned how agents were using SOD tips after a drug agent misled him, the prosecutor told Reuters. In a Florida drug case he was handling, the prosecutor said, a DEA agent told him the investigation of a US citizen began with a tip from an informant. When the prosecutor pressed for more information, he said, a DEA supervisor intervened and revealed that the tip had actually come through the SOD and from an NSA intercept.

"I was pissed," the prosecutor said. "Lying about where the information came from is a bad start if you're trying to comply with the law because it can lead to all kinds of problems with discovery and candor to the court." The prosecutor never filed charges in the case because he lost confidence in the investigation, he said.

Not surprisingly, those in the legal community are shocked that this type of wanton data sharing goes on unchecked.

“There’s nothing that allows lying to judges about the source of information in a criminal case,” Jennifer Granick, an attorney and the director of Civil Liberties at Stanford University’s Center for Internet and Society, told Ars.

Similarly, others have already started to speak out against the practice. The American Civil Liberties Union (ACLU) issued a statement.

"When law enforcement agents and prosecutors conceal the role of intelligence surveillance in criminal investigations, they violate the constitutional rights of the accused and insulate controversial intelligence programs from judicial review," wrote ACLU Deputy Legal Director Jameel Jaffer. "Effectively, these intelligence programs are placed beyond the reach of the Constitution, where they develop and expand without any court ever weighing in on their lawfulness. This is inappropriate, dangerous, and contrary to the rule of law."